Over the last couple of years, the music industry has seen a rise in guitar market retail sales and use.

If you are in the music business, you’d likely appreciate these guitar industry statistics and trends. It paints a strong picture of where everything is headed.

Here are some of the most recent statistics and trends about the guitar industry that we’ve found.

There’s been a surge in guitar sales around the world. The Covid-19 pandemic is one of the main drivers of this upward trend. Not only are sales soaring in the United States, but other places are experiencing similar growth.

As you’ll see below, guitar companies are seeing record-breaking sales thanks to the demand that the pandemic brought. It’s interesting to see that the demand is coming from amateurs who are looking to pick up a hobby while the world is on lockdown.

1. Guitar sales are rising in the United States.

Student of Guitar published data it gathered from Statista that indicates the growth of guitar sales in the United States. And things are looking great.

While there was a decline in sales during the US financial crisis, the industry was able to bounce back since then. It’s also worth noting that 50% of aspirational and beginner players are women. The whole industry used to be dominated by men.

Source: Statista via Student of Guitar

2. More people bought guitars and other musical instruments during quarantine.

During the pandemic, several instrument sellers—including Guitar Center, Sweetwater, and Reverb—reported great sales. For instance, Sweetwater surpassed $1 billion in revenue in 2020. That’s the first for the company that’s been in operations for 42 years.

Not bad for an online store.

All three retailers noted that the guitar is thriving. Searches and orders for the instrument were up significantly. This is especially true for popular guitar brands like Fender, Gibson, and Taylor. Searches for acoustic guitar and amps were up by 50% year-over-year.

Part of the success is being attributed to Fender’s online video platforms for learning instruments such as guitars, bass, and ukulele. These are helping drive the demand for Fender products.

4. Amateur musicians are driving the demand for guitars.

Amateur musicians have been driving the demand for instruments including guitars since the pandemic began. According to Reverb Chief Executive Officer of Online Marketplace David Mandelbrot, there’s been a boom for instruments that can be played in the living room like guitars, keyboards, ukuleles, and drum machines.

It seems like the constant isolation brought by the pandemic gave rise to a made-up condition that the music industry jokingly refers to as GAS or gear acquisition syndrome.

GAS is a desire by a musician (amateur or otherwise) to acquire more instruments because they’re unhappy with their current setup but often ends in guilt and dissatisfaction — and so the cycle continues.

A lot of people have turned to guitars as a means of coping with the pandemic. In the United States alone, there are millions of people who have picked up a guitar, most of which are aged 13 to 34.

Another surprise was the fact that these new guitar players have played other musical instruments before the shift.

Here are some statistics on guitar usage today.

5. 16 million Americans have picked up a guitar in the last 2 years.

Fender says that over the last 2 years, there were 16 million Americans that tried their hands on playing the guitar. And of those people, 72% were aged between 13 to 64 years old.

62% of those people cited the pandemic and lockdowns as their reason.

TikTok also plays a role in encouraging people to study guitar playing. 67% of beginners look for guitar content per week. It should also be pointed out that 38% of new guitar players identify as Latinx. They are learning the guitar to create music and perform.

There are a lot of new players in the guitar scene. And most of them are young.

As it turns out, 72% of new guitar players are aged 13 to 34. It’s also interesting to note that the majority of those had previously played another musical instrument — the piano/keyboards and bass are the most popular instruments mentioned.

58% of new guitar players are using TikTok to find guitar-related content. 33% of those beginners have a family member who has owned a guitar.

67% of new guitar players have full-time careers. They only regard guitar playing as a hobby rather than a passion.

Guitars will continue to sell in the next couple of years according to data we have today. Offline retailers have nothing to worry about as all indications point toward continued sales growth even as the threat of online sales continues to grow.

There are also other trends you might want to look out for. Electric guitars are slowly taking over acoustic guitar sales, for example.

Another thing to note is that guitar sales are expected to rise to billions between now and 2025 — giving guitar sellers worldwide something to be optimistic about.

Data Intelo’s numbers show that offline retail is still bigger than online sales as far as guitar distribution is concerned. In 2019, 62.5% of sales were from offline retailers. And by 2027, it’s still expected to dominate the market at 62.1%.

The global electronic guitars market is expected to reach $5.1 billion by 2027 according to a report.

There are several reasons why experts believe this will happen. For instance, consumers today have more disposable income and would not mind spending on hobbies like playing or collecting electric guitars.

Also, experts think music festivals and concerts will see a rise. This will lead to more people buying electric guitars.

A report by Technavio states that the guitar market is expected to grow to $1.14 billion between 2021 and 2025. However, the growth is expected to decelerate at a CAGR of over 5% during this period.

There are factors that will help fuel the growth of the guitar market. The growing popularity of music-related leisure activities is one of them. Celebrity endorsement is another factor.

The guitar industry isn’t without its faults. For instance, a big guitar brand had to settle a lawsuit because it prevented retailers from giving discounts on the guitars they were trying to sell.

But it’s not all bad news. The current boom in guitar sales is being compared to the post-Beatles era which saw millions of instruments being sold. And yes, that includes guitars. So things are looking up for the whole industry.

Here are a couple of guitar industry facts and news.

Fender was fined £4.5 million after the Competition and Markets Authority (CMA) found that the company broke competition law that prevented UK retailers from discounting its prices. Fender is one of the biggest guitar brands in the world.

From 2013 to 2018, Fender had its guitars sold at or above a minimum price. That meant buyers who wanted to shop around for lower guitar prices wouldn’t find it as retailers were forced to sell them at around the same price point.

The £4.5 million fine is the largest imposed in the UK for resale price maintenance.

11. The current boom in guitar sales is comparable to the post-Beatles era.

Experts believe that the current boom in guitar sales is comparable to the post-Beatles era. In addition, Music Trades editor Brian Majeski said that the growth in sales that the pandemic caused will likely continue in the years to come.

Acoustic guitar imports for the first half of 2021 are just shy of 1 million units. That’s 35% higher than any 6-month period over the past decade. Electric guitars also saw a 35% gain over historic averages. US-based guitar factories are experiencing peak capacity with productions booked well into 2022.

Not all sales are coming from guitar retailers. Guitars from legendary players are making their way to auction houses — and they’re selling at extravagant prices.

Johnny Ramones’ guitar alone sold for over $900,000. And that’s not even the highest-paid guitar on this guitar statistics roundup. That honor goes to Kurt Cobain’s guitar which sold at $6 million.

These are some of the most interesting guitar auction facts and news that we’ve found.

Are you a fan of Johnny Ramone? How would you like to have one of his guitars?

Well, that’s likely not going to happen unless you have a lot of disposable income. Johnny’s guitars, as it turns out, are worth a lot.

The guitar was a 1965 Mosrite Ventures II electric guitar. It is now owned by a US-based collector who wished to remain anonymous. This was the same guitar that Ramone used from 1977 to 1996 — a replacement for his stolen blue Ventures II guitar.

Nirvana’s unforgettable MTV Unplugged performance is one of the band’s most iconic. So it’s no surprise that someone would pay millions to have Cobain’s acoustic guitar — the same one he used the day of the recording.

The guitar that Kurt Cobain used in Nirvana’s MTV Unplugged show sold for a record $6 million at an auction. Before that sale, the record for most expensive purchase was $3.95 million for David Gilmore’s (of Pink Floyd fame) black Stratocaster.

Who ended up buying Kurt Cobain’s guitar? It was Peter Freedman who is the founder of RODE Microphones. He attended the live auction in Beverly Hills.

For those that want to see the guitar in person, there is good news. Freedman plans on displaying the guitar on a worldwide tour. Proceeds from the tour will go toward the performing arts.

14. Eric Clapton and Elvis Presley guitars were on auction.

Two more guitars by legendary guitarists were put on auction in late 2021. These included Eric Clapton’s acoustic guitar that he used on stage in a 1970 concert in London. The guitar was expected to fetch anywhere between $300,000 to $500,000.

Another guitar—this one owned by Elvis Presley—was expected to be sold at $90,000.

There was once a time when certain journalists were convinced that the end was near for the guitar industry.

It’s also important to remember that while sales may dip for some larger brands, smaller brands are picking up the business they’re losing out on.

Remember: we live in an age where YouTubers like Rob Chapman and Ola Englund have been able to leverage the weight of their audience to launch successful guitar brands.

And smaller builders are able to grow faster than ever before thanks to the power of social media.

But what will the future have in store for the guitar industry? Only time will tell.

Check out more of our stats roundups: 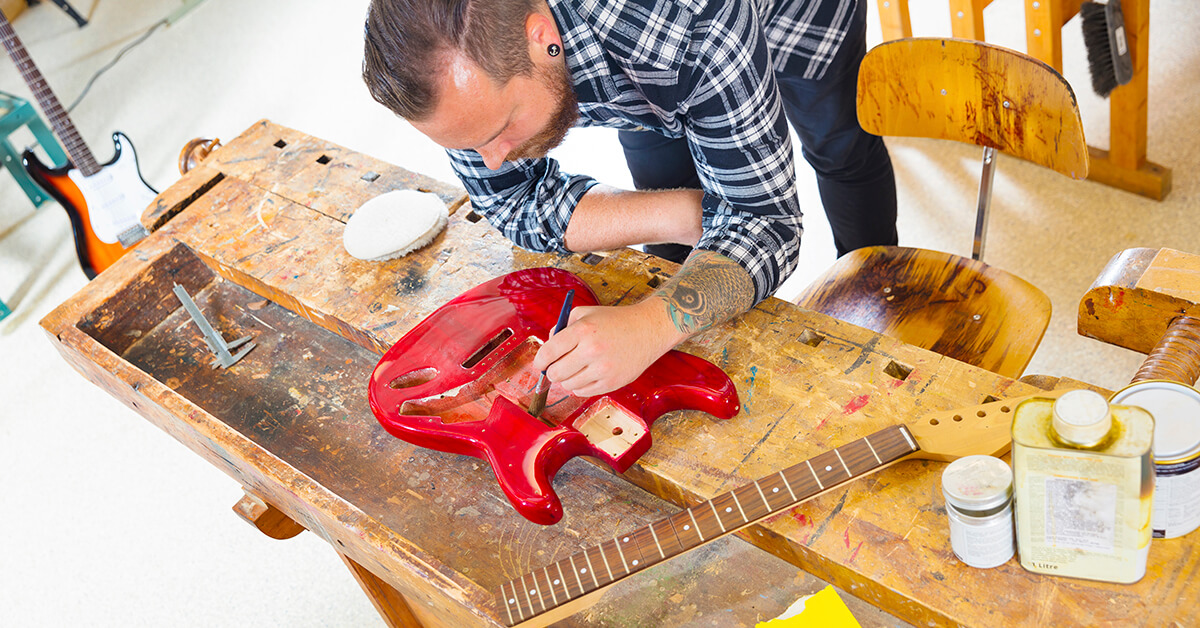