YouTube is one of the biggest streaming platforms in the world. But how much do you know about it?

In this post, you’ll find the best and most recent YouTube statistics that’ll help you learn more about this online streaming platform. Not only will you know how many people are using it, but also why they’re using it. You’ll learn all about its competitors and how it’s faring against them.

YouTube has a lot of competition. But it still manages to pull ahead of other social media platforms in certain categories. For instance, did you know that more adults in the United States use YouTube than any other social network?

And when the pandemic hit, YouTube was one of the places that people went to for information and entertainment.

Here now are general YouTube statistics that prove how huge this platform is.

1. More adults in the US use YouTube more than any other social network.

Would you believe that more adults in the United States use YouTube over any other social media platform? It’s true.

81% of adults in the US who identify themselves as social media users said they are also YouTube users. Facebook comes second with 69% followed by Instagram with 40%.

It’s worth mentioning that among all the social media platforms mentioned above, only YouTube and Reddit saw growth since 2019.

2. YouTube saw the biggest growth among social media platforms during the pandemic.

The pandemic has been tough on everyone. So when people were quarantined in their homes, they turned to YouTube to keep themselves entertained and informed.

YouTube is popular among those aged 18 to 29 years old. 95% of those surveyed in that age range said that they use YouTube.

Parents know Baby Shark all too well. But what they might not know is that this catchy tune is completely dominating YouTube right now.

Baby Shark is the most-viewed YouTube video with 7.044 billion views (as of Nov 2020). The record-holder before that was Luis Fonsi’s Despacity in 2017. That video had 7.038 billion views.

Baby Shark first went viral in South Korea in 2017 before catching the attention of the whole world. The reason why this video became the most-viewed video is that parents would let kids watch YouTube and this just so happens to be the type of video content that they like.

4. More than 40 million adults watch YouTube in the Philippines every month.

More than 40 million adults in the Philippines watch YouTube videos every month. According to YouTube, 50% of the 40 million unique local viewers in the country are aged 18 to 34.

The Covid-19 quarantine in the country also increased the watch time by 50% as people looked for ways to expand their knowledge and fuel their passions.

You’ve probably heard or know of someone who left full-time employment to pursue a career on YouTube. As it turns out, there are a lot of people like that.

According to an October 2021 YouTube report, 394,000 people in the United States work at least 40 hours per week as content creators (and earn money) on the platform.

While that is a huge number, it’s not immediately clear how many of those people are earning enough as they would if they were working a more traditional full-time job.

However, two-thirds of those surveyed for the report said they had more than 50,000 subscribers and think they have a self-sustaining business. 60% of creators feel like they have opportunities to make videos and money that traditional media doesn’t give them.

So if you’re planning to be a content creator on YouTube yourself, it’s not the craziest idea in the world as there are people who are able to make a living off of publishing video content.

Alexa data reveals that an average person will spend at least 16 minutes on YouTube.

7. 81% of internet users in the United States have used YouTube.

In a Feb 2021 survey of people in the United States, it was revealed that 81% of internet users have visited YouTube. 69% said that they have used Facebook. Only 21% said they used TikTok.

As of 2022, there are more than 51 million YouTube channels on the platform — and that number is still climbing. The year before, the number of channels grew by 36%. As a result, there are 500 hours of content being uploaded to YouTube per minute.

Of those channels, 29,000 of them have subscribers that are over 1 million. This shouldn’t be surprising since, in 2019, the number of YouTube channels with over a million subscribers grew by 65%.

9. Mobile YouTube users watch at home as a replacement for TV.

People believe that those who watch YouTube on their mobile devices are on the go and therefore use it mostly during the day. But according to Google, 3 in 4 adults use their phones at home. They treat it like a TV and watch content on horizontally oriented screens.

7 in 10 YouTube users prefer watching content horizontally than vertically. And YouTube mobile users are more likely to pay close attention to what they’re watching. That’s not the case when people watch TV.

Google also says that the main reason why its users watch content on YouTube is to feel relaxed and entertained. The top 4 content categories on the platform are comedy, music, entertainment, and how-to videos.

68% of YouTube viewers use the platform to make informed purchasing decisions.

There are a lot of YouTube users who specifically go on the platform to consume music. The fact is that there are millions of people who subscribe to YouTube Music. And at the rate it’s going, there will be more users in the coming years.

Here are some of the most interesting YouTube Music statistics that we’ve found.

10. Blackpink is the most popular music artist on YouTube.

The K-pop group Blackpink has surpassed Justin Bieber to become the most popular artist on YouTube in terms of subscribers. The group managed to get 66.3 million subscribers while Bieber has 65.1 million.

Blackpink also happens to be the first K-Pop group to go past the 50-million subscriber mark. The group had over 10 billion plays in 2021 alone.

However, the main YouTube service has over 2 billion users who listen to music through the platform every month.

12. Weekly usage of YouTube Music is on the rise.

According to Statista, the use of YouTube in the United States from 2014 to 2019 has steadily climbed. In 2014, 33% of the US population would use YouTube in any given week to consume music or music videos. That percentage increased to 50%.

That means half of the total US population used YouTube Music to listen to music on a weekly basis.

According to Google, YouTube Music users who have made music-related purchases over the past year have seen a related video beforehand.

There’s even a specific game that managed to break the 1 trillion views threshold.

Check out these interesting YouTube user statistics on gaming.

If you break the numbers down, you’ll find that 10 billion of them were from YouTube Gaming livestreams. That makes the platform a strong competitor for one of the leading live streaming platforms on the market, Twitch.

That year, the most-watched game on YouTube by far was Minecraft with more than 200 billion views. Roblox came in second with 75 billion views.

After uploading 10+ years worth of content, Minecraft and its community were able to achieve something spectacular. It has finally gone past 1 trillion views.

What’s even more impressive is that these videos are not just about gameplay. Minecraft videos have evolved to include content like parodies, animated shorts, and role-play videos.

YouTube predicts that based on how things are going for Minecraft right now, it’ll take half the time for it to reach 2 trillion views.

YouTube Gaming managed to double its hours watched metric in 2020. In 2019, there were only 3.15 billion hours of video watched on the platform. But in 2020, that number increased to 6.19 billion.

If you look at the numbers per quarter, YouTube Gaming’s total hours of video watched continue to climb. As of Q4 2020, the number of hours watched reached almost 2 billion. In Q4 of 2018, that number was only around 808 million.

That’s a huge improvement in just a couple of years. The acquisition of YouTube talents like Jack “Courage” Dunlop and Rachell “Valkyrae” Hofstetter contributed to the growth that YouTube Gaming experienced that year as it brought new viewers to the platform.

YouTube is in such a unique position because it manages to compete in so many categories. Most YouTube users view it as a video streaming platform. Although, it can also be considered a social media platform. It’s also up against live streaming platforms.

In this section, you’ll find out more about the competitors that YouTube is up against and how well it’s performing against them.

YouTube is determined to compete with TikTok. That’s the reason why the streaming platform has been testing its TikTok counterpart in markets like India. And by the looks of it, YouTube is getting the results that it wants.

With the launch of YouTube Shorts in India, it managed to get 3.5 billion views after launching in September 2020. Because of the success, YouTube planned on launching Shorts in other markets in 2021.

YouTube Shorts works just like TikTok. Users can add music, change the speed of the video, and more. However, the video length is capped at 15 seconds whereas TikTok allows videos that last 1 minute long.

18. Kids spend as much time watching TikTok as YouTube.

Kids in the US, Spain, and UK now spend as much time on TikTok as they do on YouTube. According to a study, kids aged 4 to 15 now will now spend an average of 80 minutes per day on TikTok. In comparison, the same age group will spend 85 minutes on YouTube.

So it’s a really close fight between the two social media platforms.

The study used data provided by 60,000 families with children ages 4 to 14 in the US, UK, and Spain. That means this trend does not represent what could be happening elsewhere in the world.

A new report states that Australians are now spending more time on TikTok than on YouTube. While there are more monthly active YouTube users in Australia (16 million a month) compared to TikTok (2.5 million), the latter has better engagement numbers.

A separate report shows that TikTok’s monthly usage in Australia jumped to an average of 16.3 monthly hours in 2021. In 2019, the average was only 7.9 hours.

TikTok’s rise isn’t contained to Australia though as other countries like the US and UK are seeing the same trend.

Twitch had the most number of hours of video watched in Q4 2020 at 5.4 billion. YouTube Gaming is behind at 1.9 billion. Facebook is in third place with 901 million hours watched.

And that wraps up our collection of YouTube statistics.

As you can see, YouTube is a platform that cannot be ignored.

It’s an exciting time to be a content creator. YouTube has rolled out features to support creators, and musicians. YouTube Music provides a good alternative to Spotify, and YouTube is continuing to develop revenue generation opportunities for creators.

Dig into more of our stats articles: 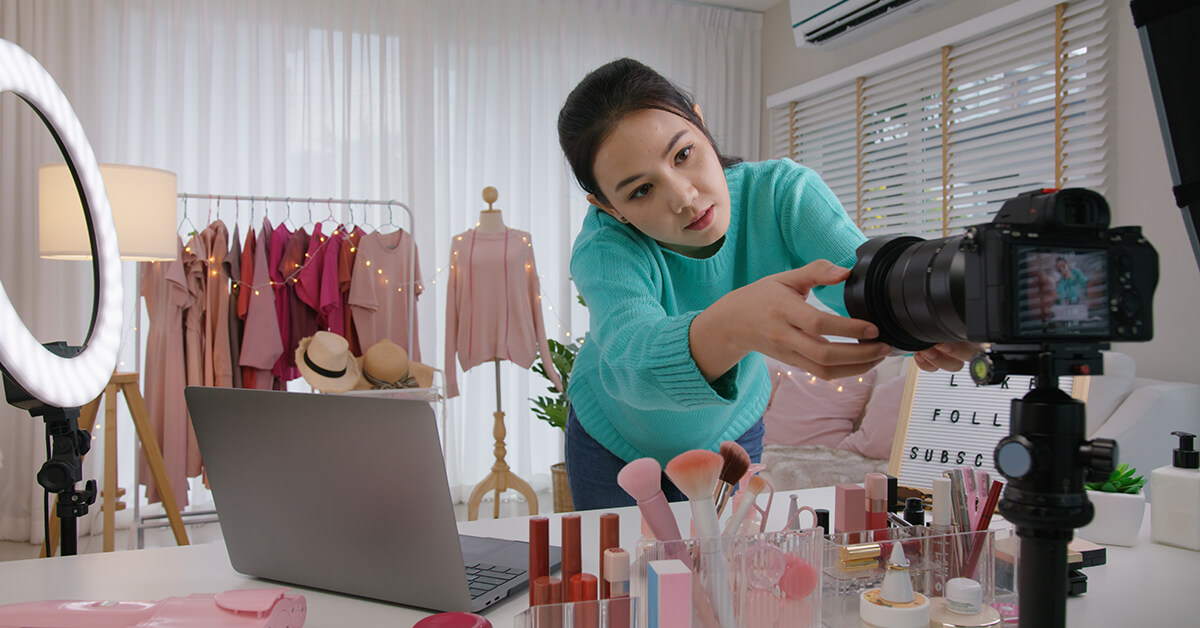